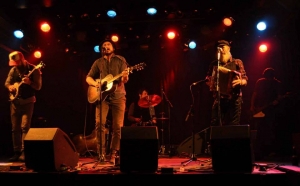 This past year has kept the boys of Ol’ Savannah on the road and in the studio.  The band’s third album in as many years, “Death on the Mountain” seeks to haunt and trance audiences away from the run-of-the-mill, happy-go-lucky, over-saccharrine melodies and harmonies of traditional folk music.   Speedy Johnson’s vocals mixed with the instrumentation (banjo, accordion, guitar, bass, and percussion) reveal a “threatening, sinister air…yet the beauty of the songs is never overwhelmed.”

Stream the entire album at www.olsavannah.bandcamp.com

All the songs were written by Speedy Johnson and Bartleby J. Budde, with the exception of their rendition of the Balfa Brothers’ Valse de Balfa.   Here are “two men on the same wave length with a vision of their music that is constantly evolving, drawing in new ideas that keep everything so fresh and original.”

I met up with “the boys”, who also include Kevin Labchuk, Tim van de Ven, and Ram Krishnan, in a downtown-Montreal watering hole.  A place where one orders an Irish Car Bomb only to receive a dirty look and a finger that points to Crescent Street. Appropriately, the bar is called Grumpy’s.  We raised a shot glass full of whiskey, toasted to another “shit-year”, and I began the interview.

How were all of your childhoods?

Van de Ven was the first to say, “I grew up in Ontario”.  Budde interrupted and said, “shut up. Nobody cares.”  Labchuk squeezed in a comment about the Canadian Navy and its sixteen ships.

If you were women, how different do you think your music would be?

[I got nothing but silence save Krishnan’s grumble, then  Johnson called for another round.]

Do you worry about whether people like you for the real you?

“I think it’s like a box of cereal.  Sometimes you read the back of the box and forget all about filling the bowl,” said Johnson.

When do you go back in the studio?

“We got some material for the next album.  Hold on to your britches and find out.”  [I’ll refrain from naming who said this.  This was kind of a ‘dickish’ thing to say, and I’m better than that.]

Why don’t you guys play top 40 hits instead and try to make some real dough?